With food prices reaching record levels can you invest to offset the hit to the household budget?

The war in Ukraine that started with Russia’s invasion in late February is having consequences other than the obvious range of disasters for those directly impacted. Among the multitude of ripple effects spreading out from the devastation unfolding is that global food prices are hitting record highs.

Much of the focus on the Ukraine war has been on its impact on energy prices. An impact that could get, foreseeably significantly, worse. Russia is the third largest oil producer in the world after only the United States and Saudi Arabia, responsible for around 10% of global supply. And Russia is the second largest producer of gas after the USA, contributing 14% of total global supply.

Russian oil and gas is being rejected by many of its previous buyers and European nations that are particularly reliant on it have pledged to find alternative suppliers as soon as possible. That has driven up the prices of all energy commodities this year, contributing towards levels of inflation not seen since the late 1980s.

And it’s not just energy prices that have risen significantly. Ukraine,  is one of the world’s largest producers of food commodities and known as the breadbasket of Europe. According to United Nations’ Food and Agriculture Organisation (FAO), Ukraine is the fifth largest exporter of wheat in the world. It held a global market share of 10% between 2016-17 and 2020-21.

Russia’s southern planes are also a major source of cereal crops into world markets. Between them, Russia and Ukraine account for a massive 12% of all the food calories traded in the world. The two warring nations produce more than a quarter of the world’s wheat and a fifth of corn exports.

A recent study by the International Food Policy Research Institute’s study sums up the problem:

“Ongoing fallout from the COVID-19 pandemic and other factors have already driven up food prices. Poor harvests in South America, strong global demand, and supply chain issues have reduced grain and oilseed inventories and driven prices to their highest levels since 2011-2013. Vegetable oil prices have also been at record levels, reflecting the short South American soybean crop, reduced palm oil supplies due to harvest problems in Malaysia, and sharply increased use of palm and soybean oil for biodiesel production. Prices of key energy-intensive inputs like fuel, fertilizer and pesticides have also been at near-record levels.”

“Russia’s invasion of Ukraine will further disrupt global markets, will have negative consequences for global grain supplies in the short term, and by disrupting natural gas and fertilizer markets, have negative impacts for producers as they enter a new planting season. This could push up already-high food price inflation…”

In March, global food prices rose by 13% to a new record high. The United Nations’ Food and Agriculture Organisation’s food prices index reached 159.3 after its most pronounced monthly rise in 14 years. Prices for vegetable oils and cereals reached record highs, as did meat and there were also leaps for dairy products and sugar.

Cereal prices were up 17.1% in March and the agency cut its forecasted 2022 global wheat production to 790 million on the presumption that at least 20% of Ukraine’s winter crop would not be harvested. The slump in Black Sea exports will only be partially offset by increases in exports from India, Argentina, the USA and EU.

The global foods crisis will be most keenly, and damagingly felt by poorer nations with vulnerable food security. But consumers in the UK and elsewhere in the developed world will also have to content with even higher prices at the supermarket, butchers and bakers than recent rises.

But rising prices benefit suppliers who are able to maintain production or even increase it. The valuations of energy companies have recently risen sharply as energy commodity prices have soared. BP’s share price is up almost 35% in the past year and Shell’s by over 60%. 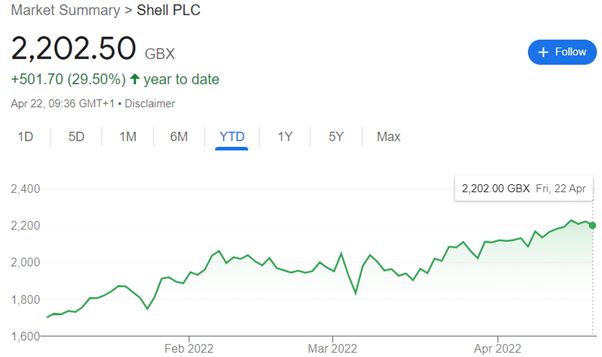 One way investors could be cushioning the financial impact of higher energy and fuel prices is to have bought shares in companies, like London-listed BP and Shell, selling energy commodities.

It stands to reason that investing in the stock of publicly listed companies that sell food commodities, or the commodities themselves via ETFs could play a similar role in offsetting some of the cost of food prices inflation. Let’s take a look at a few examples of this kind of investment:

Fidelity published an explanation of why food prices are rising in February, a couple of weeks before Russia invaded Ukraine. At the conclusion of their analysis, the investment platform suggested two funds it offers that “invest in companies either directly or supporting the food production industries”:

Hargreaves Lansdown, the UK’s largest investment platform by market share, also covers the topic and, like Fidelity, highlights the Sarasin Food & Agriculture Opportunities fund as an option for positive investment exposure to higher food prices. Another fund that HL highlights is:

Other ETF providers like iShares also offer options like the iShares MSCI Global Agriculture Producers ETF which tracks an index of global equities of companies primarily engaged in the business of agriculture. The world’s largest wheat ETF is the Teucrium Agricultural ETF.

Another option is to invest in individual companies that could benefit from higher food prices. Supermarkets don’t offer direct exposure to agriculture commodity price rises as they can also see their margins squeezed if wholesale costs are high and they prioritise keeping prices down for the end consumer.

While agricultural commodities inflation is passed through to groceries shoppers, the supermarkets sector is also brutally competitive so it’s not a simple equation. Shoppers with squeezed budgets can opt for cheaper alternatives that tend to have lower margins which isn’t good for supermarket profits even if revenues rise with prices. But at the same time, groceries are a staple purchase consumers don’t stop buying so investing in them can be a good move in a generally high inflation environment that would be expected to be worse for companies selling more discretionary goods and services.

Tesco, the UK’s largest supermarket, currently looks good value for money at a p/e ratio of around 13.5 and is in the strongest position in the sector if a price war is triggered.