Just as it seemed we were almost out of the coronavirus woods a new variant has thrown a spanner in the works and is disrupting life and the economy all over again. It remains to be seen just how long term the impact of the Omicron strain proves to be. While all the early data suggests it is the most contagious yet and renders vaccines less effective than was hoped there is also a more positive spin. Early data also suggests the illness the new variant causes may be less severe.

But whatever way it goes, many of us who were optimistic earlier this year Covid-19 may soon be more or less consigned to the past in terms of its impact on day-to-day life have started to lose that optimism. At least to some extent. Who would now bet against another new variant or two appearing on the scene next year? Hopefully, new variants will continue to become less lethal as the virus attempts to evolve to survive vaccinations. But there are no guarantees.

So who would, right now, bet against another volatile year for stock markets ahead in 2022? I’m not sure I would. This means stiffening my portfolio a little more defensively with stocks I judge to be well-positioned to best weather periods of volatility that may lie ahead.

Like many economists, I was also hopeful that the 2021 surge in inflation would prove short-lived. A relatively fleeting reaction to supply chains being disrupted by the pandemic before supply rose again to balance out the leap in pent-up demand after lockdowns.

I’m now far less confident. There are a number of arguments growing in strength that higher rates of inflation may well be with us for some time.

Early this year, in February to be precise, the Bank of England forecast that while inflation was expected to rise gradually throughout the year it would hold at just below 2%. And in 2022 would probably creep above that threshold but not for long. Since that spectacularly inaccurate prediction, the BoE has raised its inflation rate forecast with each new monetary policy report published this year.

The central bank most recently officially forecast inflation will peak at around 5% in April next year. That’s more than double what it saw as the likely peak 10 months ago. But the Bank’s deputy governor Ben Broadbent recently said he expects inflation to “comfortably exceed” that 5% figure by next spring. And at this point, who knows how much that might be upwardly revised again by February 2022?

Even if the Bank of England holds off on rate rises again this month it will almost certainly have to start hiking them from some point early next year to keep some kind of a lid on inflation. Barring new unforeseen circumstances, we can probably expect steady rises for the next several years.

The same pattern is expected to play out at the European Central Bank and the Fed will probably have to raise rates by more than we do here in the UK and in Europe.

Most markets and economic observers, myself included, underestimated the potential for inflation after a decade of sluggish economic growth following the financial crisis. The extent of supply chain disruption combined with post-lockdowns consumer demand has also caught many by surprise. The worst supply chain disruptions were expected to be over by this summer.

Unemployment levels in the UK and other developed economies could well hit record lows next year if the economy operates free of lockdowns and restrictions. That would fuel more growth and inflation.

But if Covid-19 continues to intermittently rear its head, or there are major geo-political events such as the conflict in Ukraine with Russia flaring up again, potentially at a level not seen in Europe since the Second World War or, we can expect growth to be interrupted with volatility.

Hopefully, the reality turns out to be everything goes far more smoothly than negative scenarios suggest it could. But investing is about hedging against risks as well as bravely grasping opportunity. And if everything does pan out better than expected, inflation will almost certainly hit concerning levels.

With that in mind, I think these five stocks are worth considering as hedges against inflation and volatility: 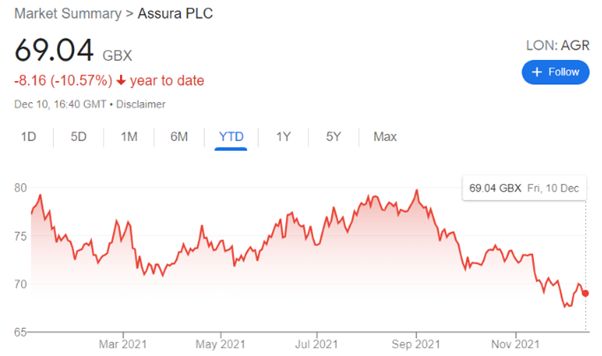 The FTSE 250 constituent you’ve probably never heard of, £2 billion-valued Assura is a slow, steady real estate company that develops and rents out GP surgeries around the UK. This is about as far as it gets from an exciting growth stock but Assura’s 625 properties, which serve 6 million NHS patients, bring in £1.6 billion a year, 82% of which is indirectly paid by the NHS via tenants. With a valuation only 20% higher than annual revenues after a 10.5% slide in 2021, Assura represents good value. Especially in the context of a steadily growing dividend expected to produce a 4.3% yield this year. 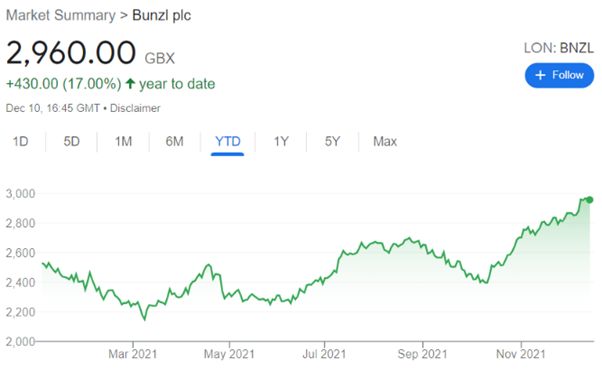 Distribution conglomerate Bunzl sells companies supplies from disposable coffee cups to cleaning and hygiene products and first-aid kits. The company essentially aims to sell companies everything they need at a cheaper price than they would be able to source themselves. It’s a low margin business model that relies on scale but works. Revenue growth is slow and steady rather than spectacular and has traditionally been a reliable low single-digit number year after year.

It’s been a good year for Bunzl investors with the share price up 17% in 2021 with own-brand, higher-margin hygiene products driving higher sales volume. That jump in growth isn’t expected to continue with low single digits expected again over the next few years. But the company has proven itself as a good hedge against inflation having managed to pass on higher expenses like increased freight costs by increasing prices.

Another FTSE 250 firm, RIT Capital Partners is an investment trust with an investment strategy that aims to preserve capital value while providing long term growth. Formerly known as the Rothschild Investment Trust, RIT was established in 1961 and has gained 32% in 2021. Despite those major gains RIT still trades at a slight discount to NAV. 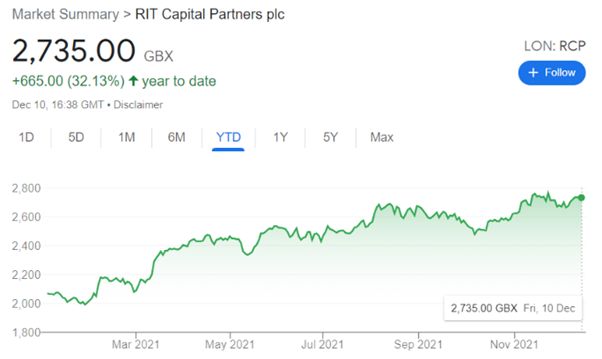 The trust invests in a broad mix of asset classes from bonds and property to global equities and private equity. RIT tends to outperform when markets are going through a rough patch but can undershoot markets when skies are clear. Fees of 1.55% per year are a drawback but could be worth it if 2022 proves to be a volatile year.

No matter how bad things get we still drink instant coffee and eat Kitkats. Or, at least, enough of us do to keep Nestle going strong. 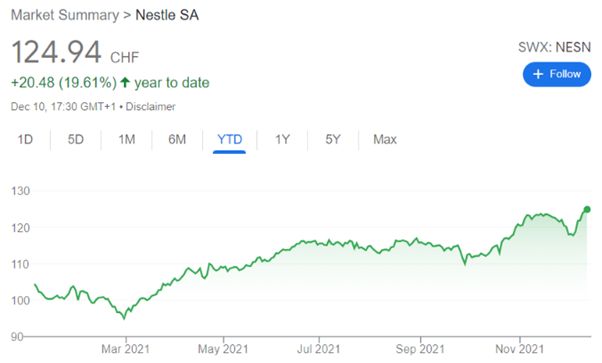 Nestle’s brand strength has allowed it to pass on higher costs over the past year to customers and while it’s certainly not a value stock with shares currently trading at 26 times forward earnings, it’s also roughly the range held for the five years ahead of the pandemic.

Organic revenue growth guidance for 2021 has been upped twice throughout the year and is currently expected to come in at 6% to 7%, which is better than consumer goods rivals such as Unilever. Nestle has also generated returns of around 50% over the past three years compared to a flat performance for Unilever over the same period.

Nestle’s strength is its growth in emerging markets and that’s expected to continue to be the driver of returns over the next few years.

As a warehouses landlord, Segro has hugely benefitted from the boom on e-commerce over the past couple of years. 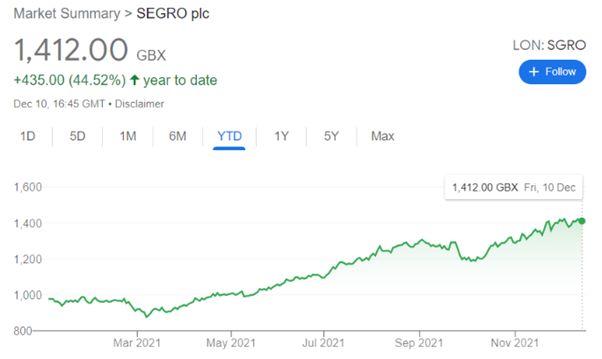 Despite its share price gaining almost 45% so far in 2021 Segro still looks reasonable value with its market capitalisation only 50% up on its level ahead of the March 2020 market crash as the pandemic began. It managed to increase average rents, new and renewed, by 13% between July and October this year and has a vacancy rate of just 3.2%. The loan-to-value ration also stands at a healthy 23%.

Segro is now the most valuable property company listed on the London Stock Exchange, with warehouses proving more valuable assets than more glamorous categories of commercial property. That doesn’t look like a trend under any immediate threat and Segro is well-positioned to take advantage over coming years.