With Wise’s share price up over 25% this week has the tide turned for fintech stocks?

Last July, the UK-based fintech Wise launched an IPO that priced shares in the company at £8 each and valued the company at £8 billion. The financial services company which targets retail users and SMEs specialises in low-cost currency exchange and international transfers is, a little over a year later, now worth just £4.46 billion, despite recent gains.

After a positive first few months as a public company saw the Wise share price rise to £11.40 by late September 2021, a period of decline saw the stock drop to a low of under £2.97 on June 30. 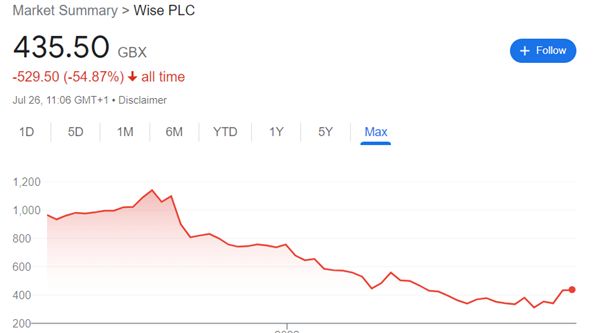 Much of Wise’s share price woes since last autumn can be put down to generally negative market sentiment towards high-growth tech companies, especially those at a less mature stage of their development. The announcement last month that Estonian co-founder and chief executive Kristo Kärmann is the subject of an FCA investigation after being fined £365,651 by HM Revenue & Customs for failing to pay a £720,495 tax bill for the 2017-18 tax year also didn’t help.

But July has been a good month Wise with the fintech’s share price gaining almost 14% thanks to reporting an impressive set of figures for the quarter to the end of June. The company made £24.4 billion worth of transfers for 5 million customers in the three months to the end of last month, representing 49% growth over the same period a year earlier. It also boosted revenues for the quarter by 51% to £185.9 million.

Revenues for the quarter were well ahead of analyst expectations such Numis’s Kim Bergoe who had expected £172 million. Investors responded by driving Wise’s share price up 15% to just over 400p a share before further gains last week took it to 456p at one point on Friday.

A reversal that took hold on Friday afternoon and continued on Monday before new gains today has pulled the Wise share price back to 435.5p. But the fintech’s most recent quarterly results were unquestionably positive.

With the company’s market capitalisation currently only slightly over half of its £8 billion IPO valuation and performance positive despite the tough economic environment, are Wise’s shares worth a closer look by investors?

The first big question to ask is why Wise’s valuation fell so drastically between last autumn and this summer?

Why did the Wise share price drop so much?

Wise debuted on the London Stock Exchange to significant fanfare last year at a valuation of £8 billion. At the time, the peak of the rotation into growth stocks last year, it was considered a relatively conservative price. That was influenced by the flop IPO of Deliveroo three months earlier which had seen the delivery app’s valuation plunge by 26% on its first day of trading. Despite that, Wise’s £8 billion valuation made it the LSE’s biggest ever tech listing.

The initial pricing strategy appeared to have paid off for Wise and its IPO share price of 800p steadily rose to 1140p over its first two and a half months as a public company. However, it has been in steady decline since despite its last published quarterly results showing year-on-year growth of 51%. Quarter-on-quarter growth was an even more impressive 21%.

Most analysts are bullish on Wise and investors have reacted positively to the results published last week. But the company is still worth just a little over half of what it was a year ago despite a big leap in revenues and profits and fast progress in its mission to gobble up market share for cross-border transfers.

Wise has undoubtedly been caught up in the tech rout that has wiped hundreds of billions from the valuations of growth stocks since last autumn in response to rising inflation and interest rates. Quoted by ThisisMoney, Jason Hollands, managing director of the stockbroker Bestinvest, comments on the Wise share price:

“The underlying cash profitability is sound – it made £121 million of earnings before interest, tax depreciation and amortisation in the year to 31 March, but on conventional valuation metrics it was very fully valued when it came to market.”

“Given the derating and continued growth progress, it might be worth considering [buying]. As always, the principle of caveat emptor – buyer beware – should apply when considering stocks where much of the valuation will be driven by future rather than current earnings expectations.”

Some analysts and investors are also put off by Wise’s stated mission to continue to cut prices for its users as much as possible, which means future revenue and profit growth will come down to volumes rather than improving margins.

Investors like companies that have pricing power so they don’t have to always rely on growing volume. But Kärmann is on record as saying he would eventually like to eliminate fees from the platform, which already significantly undercut those of retail banks and other traditional cross-border transfers services, and earn only on a modest currency conversion spread.

In Wise’s favour is that it continues to grow revenues and profits at an impressive pace despite extremely challenging broader market and economic conditions. It also has a growing user base it will be able to offer a broader suite of financial services and products, potentially of the variety that offer more attractive margins, in coming years.

That’s reflected in the fact that of the eight analysts covering the stock polled by the Wall Street Journal, four currently give Wise a ‘buy’ rating and three ‘hold’ with only one giving it a ‘sell’. The consensus is that the stock is currently ‘overweight’, which means analysts believe the stock should perform better in future 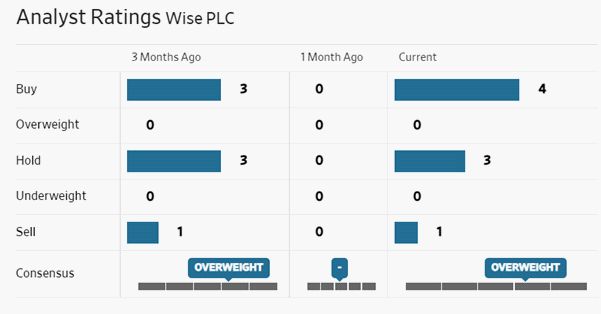 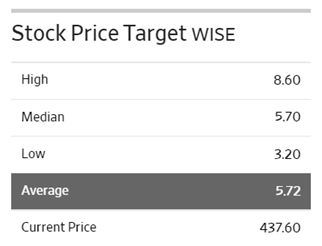 An investment in Wise wouldn’t be without its risks but at the company’s current valuation, against the backdrop of its strong performance, they could be seen as very acceptable in the context of the potential upside.

As someone who has been using Wise for almost 10 years now and is extremely happy with the company’s service and execution, I personally see the current valuation as an opportunity. But any investment in the company’s stock should be seen as a long term position with market conditions potentially weighing on the valuation for several months to come. Although, if the next quarterly report is even as close to as positive as the most recent, progress could be accelerated.