London-listed travel sector stocks rallied strongly yesterday on December airline passenger numbers reaching 80% of their pre-pandemic levels. The release of the figures, higher than expected despite the arrival of the new Omicron variant of the Covid-19 virus, has given investors optimism that the travel sector will experience a strong recovery in 2022.

EasyJet chief executive earlier this week said he expected the budget carrier’s passenger numbers to have returned to normal by this summer and Christmas travel levels indicate that might, in fact, be possible. Every single airline and travel company listed on the London Stock Exchange (LSE) saw strong gains yesterday. 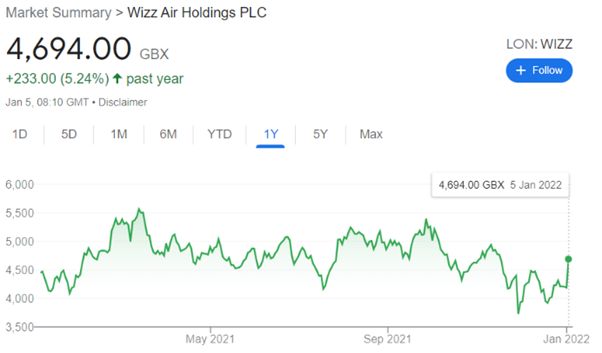 Wizz Air, the central and east Europe-focused budget airline, led the way with its valuation rising by 12.2%, followed by 11.3% for British Airways-owner IAG. Package holidays specialist Tui was up 10.4% and the budget airline EasyJet by 9.2%. Ryanair, forced to give up its London listing last month due to Brexit-deal-related share-trading restrictions rose 8.9% on the Euronext. The gains across the sector effectively cancelled out share price losses incurred when the new strain came to light late last year.

Hungarian Wizz Air has grown to become Europe’s third-largest budget airline in recent years on flight routes that connect west European cities with those in central and east Europe.  It said it had carried 2.6 million passengers in December. That was 400% more than in 2020 and 80% of the 3.3 million passengers the airline carried in December 2019, before the pandemic hit.

In November Wizz reported carrying 72% of 2019 passenger numbers over the same month. The company, which last year made a quickly dismissed acquisition bid for larger rival EasyJet, hopes to take advantage of its strong recovery from the pandemic to expand over the next few years. It has acquired new take-off and landing slots at Gatwick from which it will fly 14 new routes from March.

EasyJet has been one of the company’s worst hit by the pandemic and its share price dropped to within touching distance of nine-year lows immediately before Christmas. Including the 9.2% added yesterday, the EasyJet share price has now rallied over 20% over the past three weeks.

Investors may also have had their optimism for the sector boosted yesterday by research from UBS analysts suggesting airlines may suffer less severe losses than feared while the sector recovers. Jarrod Castle, an analyst at the bank wrote in an investment note: