An early ‘lockdown winner’, videoconferencing app Zoom was used so frequently as lockdowns were introduced last year “to Zoom” quickly entered the lexicon as a new verb. The company’s share price increased more than sevenfold between the beginning of 2020 and its peak in mid-October.

It has since suffered a slide of a little over 40% but that can largely be put down to over-enthusiasm among investors, mainly smaller retailer investors, driving the share price to unsustainable levels. 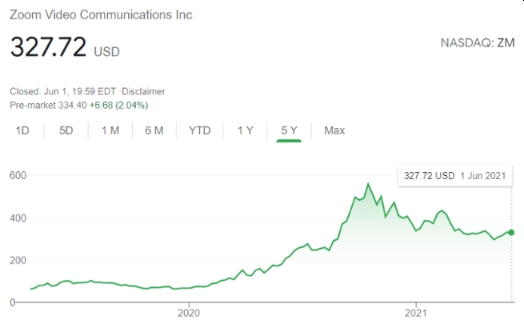 Overall, the company is confident that the gains it has made in paying user numbers, there is also a freemium version of the app, will hold as the pandemic eases. Eric Yuan, Zoom’s co-founder and chief executive, yesterday told investors the company now expects revenues to increase by about 50% this year, an upgrade on previous forward guidance.

He believes the accelerated growth in the wider teleconferencing market will not be reversed in the months and years ahead and that remote communication between professional colleagues will continue to play a growing role in how businesses operate.

While delivering the company’s quarterly results, which saw revenue over the first quarter to the end of April increase by over 191% from $328.2 a year earlier to $956.2 this year, Mr Yuan commented:

“We have opened our technology portfolio to developers through our powerful video SDK and to businesses to expand their reach through Zoom Events. Work is no longer a place, it’s a space where Zoom serves to empower your teams to connect and bring their best ideas to life.”

Despite the fact the quarter’s revenue growth beat analyst expectations for $906 million, the Zoom share price yesterday dipped by 1.15%. Profits for the quarter increased almost tenfold from $27.04 million over the three month period in 2020 to $227.4 million. The number of paying Zoom customers with over 10 employees was up 87% on the previous year.

Second quarter revenues are expected to come in at between $985 million and $999 million. The lower end of the range would represent quarter-to-quarter growth of just 3% and 4.5% at the upper end. That has slightly disappointed growth-hungry investors.

Zoom was founded ten years ago and listed in 2019. Its staff numbers have doubled from 1700 over around 3500 in the two years since. Mr Yuan still owns around 15% of the business.