The share price of IAG, owner of British Airways, has plunged by over 7% this morning after the company announced it will raise €2.75 billion through a share placement. The cash injection is needed to shore up the company’s creaking balance sheet as losses mount as a result of the disruption to international travel caused by the Covid-19 pandemic. 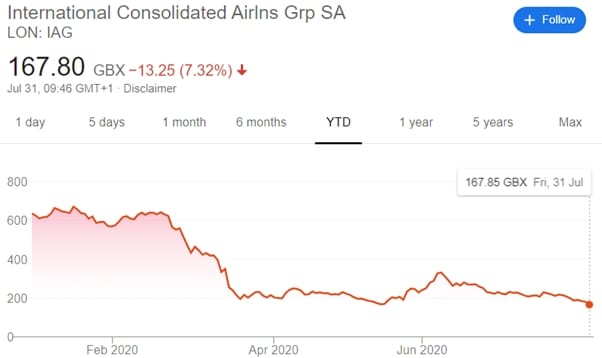 Posting its first half financial results last, IAG announced an operating loss of €4 billion over the first 6 months of 2020. That compares to a €1.1 billion profit over the same period a year ago.

Chief executive Willie Walsh would be excused for breathing a sigh of relief that he is stepping down from his role in September. The move was announced in early January, before the extent of the coronavirus pandemic became clear. He warned with the announcement of the huge losses that the airline industry faced an “unprecedented crisis”, as a result of the pandemic.

He forecasts that it will be at least 2023 before passenger levels recover to where they were last year. That means that in order to survive, more cuts to jobs than have already taken place may be necessary as the company restructures. Relief available through government job retention and wage support schemes have kept redundancies down for now but that is expected to change as support is withdrawn.

IAG reported a catastrophic drop of 98% in passenger numbers on flights which did operate over the six months to the end of June. Revenues were down 56% to €5.33 billion. An impairment charge of €2.1 billion was also booked on the value of the company’s fleet being downgraded as well as negative outcomes on fuel and foreign exchange hedges.

“At the end of June liquidity stood at €8.1 billion. Based on our current capacity planning scenario, we would reach breakeven in terms of net cash flows from operating activities during the fourth quarter of 2020.”

Qatar Airways, IAG’s largest shareholder with 25% of the company, is backing the fundraising.

IAG came into existence in 2011, after a merger between BA and Spain’s Iberia, along with its short-haul budget operator Vueling. Aer Lingus was subsequently added to a group that employed around 64,000 and had a fleet of 570 aircraft in active operation before the pandemic struck. BA is currently laying off around a third of its workforce, 12,000 staff, through a redundancy programme. Those that remain are likely to be requested to accept changes to their terms and conditions. There has been criticism of how redundancies are being handled.

Since the beginning of 2020, IAG’s share price has lost over 70% of its value. They currently trade at under 168p, following today’s loss of over another 7%. Over the first 3 months of the year, IAG reported a 13% decline in revenues to €4.6 billion. It was expected that the second quarter would me markedly worse, with all three months falling under international lockdown measures during which international travel was largely off the table.

It was further announced today that Antonio Vazquez, IAG’s chairman, will retire in early January. The role will be filled by Javier Ferrán, who is currently an independent non-executive director the IAG board. CEO Mr Walsh’s successor will be Luis Gallego, who has headed up Spanish division Iberia since 2014.

IAG’s woes are mirrored across other airline companies. On Tuesday, Ryanair reported that its fleet had carried only 500,000 passengers between April and June, compared to 41.9 million over the same three months a year earlier. Over the whole of 2020, the budget airline, Europe’s biggest, expects to carry 60 million passengers. That’s around 40% of 2019 numbers.

Ryanair’s revenues for the quarter were €125 million compared to €2.3 billion a year earlier. That saw a €243 million profit twelve months ago turn into a €185 million net loss.