The FTSE 100 aerospace and defence engineer Rolls-Royce saw its share price leap by over 11% yesterday, taking gains for the year-to-date to 42%, after the company announced two new major deals. The company, which suffered badly during the coronavirus crisis as the civil aviation industry which it derives much of its revenues from saw activity greatly reduced, said it has reached an agreement to sell its Spain-based business for €1.7 billion. Rolls also announced a major new contract with the U.S. air force.

The share price gains took the Rolls-Royce valuation back to its highest level since March 2020, though it is still almost 40% down on its level before the Covid-19 pandemic sell-off took hold in February last year. However, investors are showing increasing confidence there is now light at the end of the tunnel for the company and it can recover from the woes of the past year and a half. 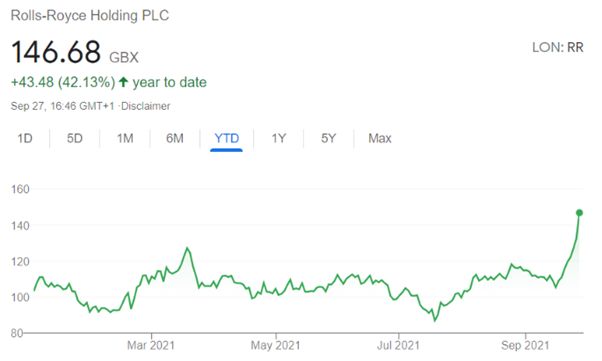 The other good news was the announcement of a new contract to supply engines for U.S. airforce B-52 Stratofortress bombers that could be worth up to $2.6 billion for Rolls-Royce. Each aircraft has 8 engines.

The contract was secured at the expense of Pratt & Whitney, the Raytheon company that currently holds it. Rolls will supply 608 engines as well as spares and oversee the installation of engines for the 76-strong fleet of B-52s. The contract guarantees an initial payment of $501 million and total income would hit a maximum $2.6 billion if all options are exercised.

The contract justifies the $600 million investment Rolls has made in its Indianapolis facility, where it will be fulfilled, to

“to create the most advanced engine manufacturing site in the US”.

The engines, F-130 models, will be integrated in the B-52s by their manufacturer Boeing, with oversight and engineering data provided by Rolls. The company says the Rolls engines will offer “vastly greater fuel efficiency” than the current Pratt & Whitney technology.

While neither deal solves Rolls-Royce’s problems and the impact of the Covid-19 pandemic, they do make a significant contribution to the prospects of a long term recovery and, as already evidenced by recent share price gains, an improvement in investor sentiment.