The Trainline share price tumbled by 12.9% yesterday after Clare Gilmarten, the company’s chief executive of 7 years, announced that she is stepping down from her role for personal reasons, including spending more time with her young family. However, having sold a third of her shares in the company for £15.8 million immediately after the IPO she headed up last year, and another £3.2 million worth in late August, there is a suspicion Ms Gilmarten’s departure also has shades of abandoning a sinking ship. 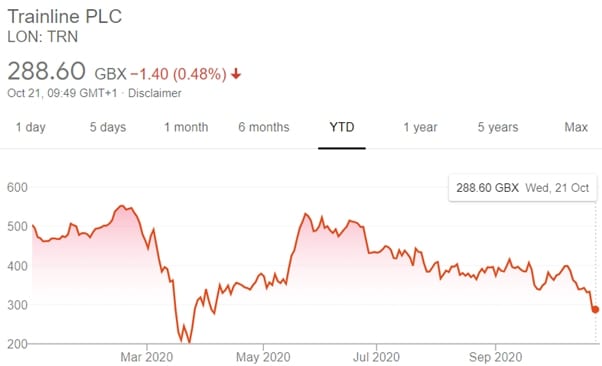 Last year Trainline went public through an IPO that priced its shares at 350p each, giving the ticketing app that sells mainly train but also bus and ferry tickets a £2 billion valuation. At the time, that was 23 times earnings. However, the company’s business model has this year been devastated by the Covid-19 pandemic, which has led to train passenger numbers plummeting. Over the first half of this year Trainline’s revenues were as low as a quarter of those over the same period a year earlier.

That Ms Gilmarten has decided to step back from a high pressure position she has held for almost 7 years to spend more time with her family and any other personal reasons or motivations, is perfectly understandable. The 45-year-old has three school-age children and, since she is not a founder of Trainline, has been in the chief executive seat longer than average.

However, the surprise nature of her departure announcement, just weeks after accepting an award from the London Stock Exchange with the comment “we continue to be hugely motivated by the long-term growth opportunities in our business”, has raised some eyebrows. That she chose to cash out so many of her shares over the year leading up to yesterday’s statement has been pointed to by some as evidence that the development may have been under consideration for some time.

It’s the second major board departure from Trainline since its listing last year. Just three months after that, chairman Doug McCallum also stepped down from his role. KKR, the private equity company that acquired Trainline for £450 million in 2015 has completely cashed out its stake since the company went public, turning a £927 million profit on its initial investment.

How keen major shareholders directly involved in the company have been to sell up large chunks of their equity relatively quickly after the IPO, doesn’t paint a picture of ironclad confidence in Trainline’s future prospects.

Of course, it is fairly standard for management and private equity investors to cash in equity holdings during or shortly after a company goes public. At least to some extent. And share sales made before February of this year were clearly not made in anticipation of the impact the Covid-19 pandemic would have on the travel industry.

But the extent those sales at Trainline do perhaps hint at some lack of faith in the company’s future growth trajectory.

Ms Gilmarten will be succeeded by Jody Ford, who last month took over as Trainline’s chief operating officer, having been recruited from Moonpig owner Photobox. She will remain in her role until the handover next February and will also then continue as a ‘senior adviser’ to the board.

Despite the surprise nature of her departure announcement, she will be credited with leading Trainline towards becoming a public company, managing a successful IPO, and generally making a significant contribution to the company’s development, particularly international expansion, during her time in charge.

One of the most respected female executives in the tech industry, she has been an outspoken advocate of work-life balance. and instilled a results-based culture in Trainline. Her mantra was that results rather than the time spent on achieving them was what was important.