Ruffer, the first mainstream fund manager to take the plunge and make a bitcoin investment on behalf of its client has made a cool $1 billion on the position in just five months. However, having initially invested $600 million in November, a rare short-term trading position for an asset manager that usually takes a longer term view with its investments, Ruffer has now sold out of bitcoin. 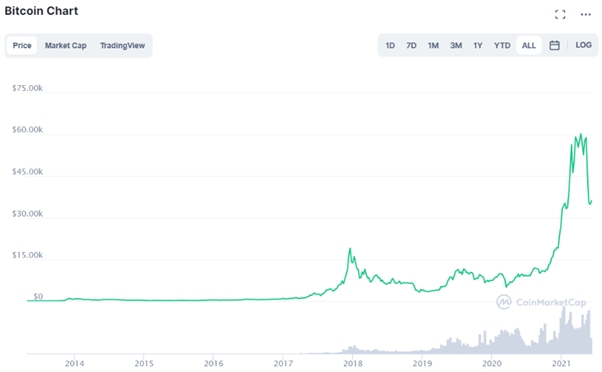 Hamish Baillie, an investment director at the asset manager, revealed the decision to lock in profits and sell out of its bitcoin position was partly motivated by the belief the end to pandemic lockdowns will see a drop in bitcoin trading activities as younger people spend less time online.

The call to cut short its brief, albeit outstandingly successful, flirtation with cryptocurrencies as an asset class will now cast as much doubt on the long term future of bitcoin as a mainstream asset class as Ruffer’s initial move to buy into it sparked optimism.

Baillie’s account of Ruffer’s approach to its bitcoin investment makes it sound more like an opportunistic gambit than a vote of confidence in bitcoin as a mainstream financial instrument.

“When the price doubled we took some profits for our clients in December and early January. We actively managed the position and by the time we sold the last tranche in April the total profit was slightly more than $1.1 billion.”

Baillie said he believes Ruffer will invest in bitcoin again in the future, as will other major financial institutions, with Goldman Sacks namechecked. However, he also described how Ruffer anticipated government measures to protect economies from the pandemic’s impact, such as the U.S. handing out cheques to citizens, stimulating demand for assets like bitcoin.

That left at least a little doubt as to whether Baillie’s statements of belief in bitcoin’s mainstream future were genuine or diplomacy masking a hugely profitable short-term trade that preyed on the inexperience of many of those young investors trading bitcoin in recent months. Asked about the possibility of future forays into bitcoin trading Baillie said the prospect was “certainly not off the menu”. He continued:

“If you have a multi-asset strategy then things that behave in different ways are really helpful. There’s no point being multi-asset if all your different assets move with the same dynamics.”

The open-ended comment could be cynically interpreted as readiness to take advantage of future conditions that provide as clear an indication a bitcoin bubble is forming that most likely has a few months to run.

Baillie did, however, defend bitcoin against one of the most frequently levelled criticisms of the leading cryptocurrency – the energy consumption involved in running its blockchain technology. He comments:

“There is a lot of hyperbole and misinformation out there when it comes to bitcoin’s carbon footprint. Bitcoin uses less electricity than the gaming industry….Probably somewhere between 40 per cent and 70 per cent of the electricity used is coming from renewable sources”.

He also championed bitcoin’s qualities as a store of value and a potential lifeline for people living in developing nations:

“The other thing is the huge social benefits. [Western] currencies have been relatively stable, but imagine if you’d held bitcoin for the last ten years and you lived in Venezuela. It’s been a wonderful store of value outside the monetary system”.

“And you can transfer money across borders, which is helpful, particularly in developing nations.”

Baillie said the profits made on Ruffer’s bitcoin trading over the past 5 months have been reinvested in “protective” assets like inflation-linked gilts. That could indicate the asset manager is worried about the risk of pain for risk-based asset classes as stimulus measures are withdrawn from markets over the coming months. Baillie confirms rising inflation is a concern because governments will be reluctant to raise interest rates after building up such huge piles of debt over the pandemic.

The case for investing in the video games...

With bond yields at historical lows, they are not a particularly attractive investment for... END_OF_DOCUMENT_TOKEN_TO_BE_REPLACED

Most of the world’s investment capital is held in the stock of companies known... END_OF_DOCUMENT_TOKEN_TO_BE_REPLACED

It’s not so long ago millennials and Gen Z were being criticised for spending... END_OF_DOCUMENT_TOKEN_TO_BE_REPLACED

After a year that strongly favoured risk-on investments as stimulus cash flooded markets and... END_OF_DOCUMENT_TOKEN_TO_BE_REPLACED