Greggs share price gained 16.5% yesterday after the company bounced back from last month’s surprise reporting of an easing of sales with its fifth profit upgrade in just a year. However, yesterday the company stated that recent trading has improved and sales compared well to a particularly strong performance over the same period last year.

Revenues generated over the six weeks to November 9 were, in fact, 12.4% up and like-for-like sales across outlets up 8.3% Over the whole year-to-day, Greggs’ total sales are up 13.4% and underlying sales improved by 9.2%. The company also reassured investors that while its Brexit preparations have involved the stock-piling of certain key ingredients, operational costs have remained under control.

The company’s profit forecast upgrade is supported by sales that are proving to be ‘very strong’ over the current fourth quarter. That has seen the profit outlook for the year upgraded to £111 million from a previous analyst expectation for £108 million. The result was a rise in the FTSE 250 stalwart’s share piece to £20.64 with a gain of £2.09. The company’s overall market capitalisation now stands at just shy of £2.1 billion. 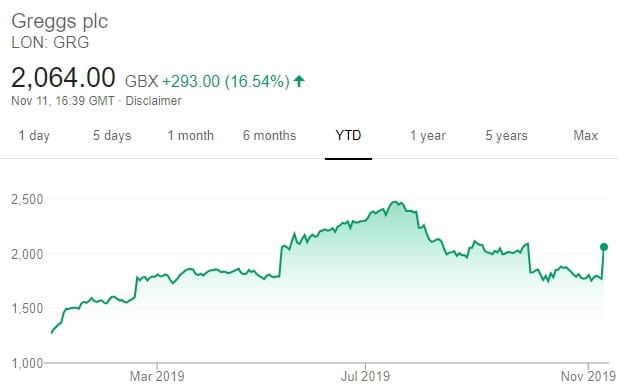 Even more positively, after a period of such sustained growth, is the Mr Whiteside the consistently improving sales figures that Greggs has recorded over the past 12 months have been down to growing sales number and not price increases. The company’s famous hit of the vegan sausage roll, which proved popular enough to make the national news and crowds swarmed on Greggs outlets to try one, was touched on as a plus. The company’s vegan line is being extended with Christmas mince pies also having seen their recipe adjusted to qualify. Vegan equivalents to a number of other best-selling products are also being developed to be added to the sausage roll. However, the company is keen to get the quality right on vegan alternatives due to the fact the company’s research indicated that as much as 80% of those who buy the vegan sausage roll are not actually vegans, or even necessarily vegetarians, and so want a product that does not represent a taste compromise.

However, Mr Whiteside was keen to add:

“More and more people are recognising that Greggs is a lot more than sausage rolls. We’re not a bakery any more, but a modern food-on-the-go retailer.”

That evolution from bakeries chain to more general food retailer can be seen in the way Greggs is both testing hot food counters in certain stores as well as now working with Deliveroo and Just Eat on home deliveries. A pilot scheme has also seen 100 stores extend their opening hours to 21:00 to catch the after-work and early evening crowd as well as breakfast, lunch and daytime snacking.

Greggs’ recent success has seen the chain move ahead of Starbuck’s as the UK’s third biggest coffee seller on quantity, behind only McDonalds and Costa. It has also now knocked Tesco off the top spot as the company that sells the most sandwiches in the UK. Greggs now operates close to 2025 stores.