How good value is the Kingfisher share price as B&Q owner spends £300 million on its own equity?

Kingfisher, the London-listed owner of the B&Q and Screwfix DIY brands as well as several European chains, recently announced a £300 million share buyback. Its share price has declined 23.5% this year as it has grappled with inflation, supply chain difficulties and labour shortages like many other retailers.

As a “pandemic winner” which benefited from people spending more time at home also spending more money on their homes, Kingfisher’s valuation has also suffered from the familiar hangover of lockdown revenue growth proving unsustainable. 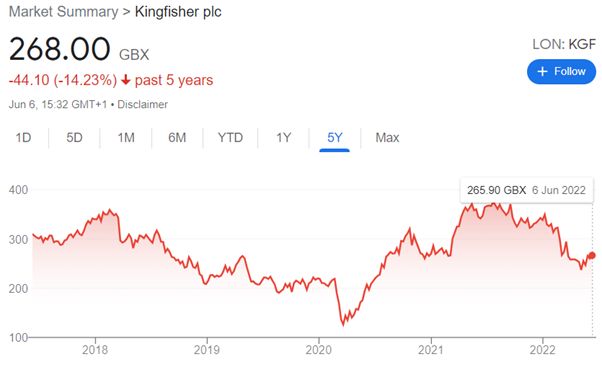 Its share price losses over the past year pale into insignificance beside those of other companies like the American streaming giant Netflix, upmarket exercise bike brand Peloton and video conferencing app Zoom. They have all lost over 60% of the valuations in the last year (almost 90% in Peloton’s case).

Kingfisher’s 23% decline in the past year is relatively mild in that context. But has still disappointed investors. However, when announcing its most recent quarterly trading update in late May, Kingfisher struck a bullish tone, despite admitting it is not immune to the cost of living crisis and supply chain snarl-ups hitting other retailers.

But despite a challenging economic environment of inflation on track to hit 10% this year and interest rates rising, Kingfisher told investors it is confident it will still meet its full year guidance. Other retailers have been queuing up to downgrade yearly guidance over the past couple of months.

Kingfisher also announced a new £300 million share buyback, arguing that it is an obvious, low-risk way to return cash to shareholders because its sees its current share price as undervalued by the market. The company’s valuation is up almost 10% in the past month and significant share buybacks can be a good sign. But it can also be a sign of a board and management looking for a quick fix to a sliding valuation putting them under pressure.

How should investors see Kingfisher’s valuation prospects? Should they be taking the lead from a company spending hundreds of millions buying its own shares?

Why do companies buy back their own shares and is it a good or bad sign?

Public companies tend to spend money on buying up their own shares for two main reasons. The first is because the board and management are convinced the market is currently undervaluing it. They can’t see that continuing given how they see the company’s prospects and investing in itself seems like the best use of cash on the balance sheet.

The company buys back its own shares because it is convinced they are a bargain at their current market value and have considerable short to mid-term upside.

The second major reason for a share buyback is as an attempt to support a struggling share price. A company spending potentially hundreds of millions buying back its own shares increases demand, which creates positive momentum for trading value. If these shares are then cancelled, all remaining shares subsequently benefit from reverse dilution.

A company having fewer shares can help improve several financial ratios that investors look at when assessing value. These ratios include a company’s return on assets because spending cash on shares that are then cancelled reduces assets on the balance sheet. Another important ratio supported by share buybacks is earnings per share because returns are divided between fewer shares. Improved earnings per share also feeds through to a better price to earnings (p/e) ratio.

These two primary motivations for share buybacks are not, of course, mutually exclusive. A company could be primarily motivated by the conviction good times ahead will see its share price rise, making its own equity a more attractive investment than other options available to it. Like using the cash for acquisitions, R&D or other kinds of capital investment. The fact that doing so will also help boost key ratios investors look at when assessing value is a nice bonus.

The worry for investors is a share buyback is more of a rearguard action. For example, because the board and management are under pressure over poor investor returns. They are looking for a short term fix with their own interests perhaps taking precedence over the long term interests of the company and its shareholders.

The cash might generate more long term shareholder returns if invested in R&D, developing new markets, making acquisitions etc. But if the board and management are under pressure now and investments are expected to need time to create value, as well as inherently carrying risk, a buyback can be an easy sell.

Is Kingfisher’s decision to buy back £300 million of its equity an astute investment or panic buy?

It’s fair to say markets are not currently overly enthusiastic about retailers of discretionary products. Whether to DIYers through B&Q or mainly tradespeople and SMEs through Screwfix in the UK, and their sister brands in continental Europe, Kingfisher sells products used in home improvement, maintenance and construction.

It sells products considered cyclical and representative of discretionary spending that can often be put off if buyer sentiment is poor. If, as expected, the coming months see a decline in discretionary consumer spending, Kingfisher would be expected to experience weaker trading conditions.

But despite that threat, the company believes it will meet its full year guidance. And many analysts are convinced a tough economic environment is already built into Kingfisher’s current valuation. At present share price levels, Kingfisher has a price-to-earnings ratio of around 9, which would generally be considered to offer very good value.

With a net-debt-to-equity ratio sitting at around 23% including lease liabilities, Kingfisher also has a strong balance sheet. That should allow it to ride out and potentially capitalise on a period of weaker trading conditions. It said when issuing its recent trading update it is increasing market share as smaller and less liquid rivals run into difficulties. That’s a trend that can be expected to strengthen if economic conditions are poor over the next year or so.

Kingfisher also told investors it is managing inflation by succeeding to pass on cost increases to customers, which should mean margins remain solid. A dividend yield of 4.8% alongside a consistent recent policy of share buybacks is also attractive.

Attractively priced acquisitions are likely to become an option over coming months, adding to future growth potential. There is also plenty of potential growth for Kingfisher’s e-commerce operations, which currently generate around 18% of sales. That’s a 10% increase on two years ago but still leaves plenty of scope for improvement, especially considering its brands’ relatively well established and strong online presence compared to rivals.

Kingfisher’s share price may not rocket over coming months and further declines are also not out of the question. But the company’s decision to spend hundreds of millions of its cash reserves on its own equity looks sound, especially if taking a longer term perspective.

Long term investors could do well to take note.