How and why to invest in lithium, the batteries component Goldman Sachs has dubbed “the new gasoline”

If 2022 has taught us anything it is how much the world still relies on fossil fuels. Inflation in the UK, and much of the rest of the developed world, is on the brink of hitting double digits for the first time in over three decades. The last time inflation was this high, Margaret Thatcher was the UK’s prime minister, Ronald Reagan was in the White House, Olivia Newton-John was all over the radio, and kids were begging their parents for a Commodore 64, a computer named for its 64 kilobytes of memory. Diet Coke was about to launch.

In the 1970s and early 1980s, rampant inflation was sparked by sky-high oil prices. The same can be said this time around, though the prices of agricultural commodities, metals and other materials are also contributing significantly.

The last two times oil prices blew a hole in the global economy, the geopolitical crises that caused the problem were centred around the Middle East. This time prices have ballooned because Russia invaded Ukraine. Russia is the world’s third-largest producer of oil, responsible for around 20% of global sales before the war started, and second-largest producer of gas after the USA. It is the world’s largest exporter of natural gas.

We’re almost certainly going to be feeling the pain of high oil prices for the next year or two. But the good news is it won’t be long, two to three decades if global climate change goals are met, before the world is no longer dependent on oil and gas.

There’s a long way to go but we’ve started the transition towards predominantly powering our daily lives with renewable energy, not fossil fuels. Over the next twenty years or so, combustion will be mainly replaced by batteries. Goldman Sachs has gone as far as to label lithium “the new gasoline”.

However, the switch to lithium-ion battery technology charged from renewable sources will also have dependencies. Lithium will be one. It’s needed for the electrification of vehicles and heating systems among other things.

The problem is, lithium supplies, and the manufacturing facilities needed to turn them into batteries, are also mainly controlled by countries the West has geopolitical tensions with that could foreseeably escalate – particularly China.

It’s not even that China is such a critical source of the raw lithium carbonate that is processed into the material used in batteries. It is the second largest producer, almost 13 million kg in 2019, but dwarfed by Chile which produced almost 82.5 million kgs. Argentina is also a big producer, and like Chile produces lithium carbonate from brine concentrate, as in Australia whose supplies of lithium hydroxide come from open-cut mines.

But China has stealthily invested in building up a stranglehold on much of the global supply of lithium carbonate. And it dominates the world’s processing capacity. In short, the West is almost completely reliant on Chinese lithium and battery exports.

That’s a problem which has been recognised and the UK, EU, USA, Japan and other major economies are now belatedly scrambling to invest in their own processing facilities and battery plants.

A rush to secure lithium supplies previously gobbled up by China is also driving prices higher. The price of 99%-pure lithium carbonate imported to China more than doubled in the two months to the end of December, to $13,000 a tonne. The price has almost doubled again since, despite prices easing from early April. The cost of processed lithium ready to be used in batteries has risen sixfold from $12,000 a tonne in 2017, to more than $78,000 today.

The problem is not scarcity of lithium, the Earth contains plenty. But extracting it is expensive and time consuming, which means supply is relatively inelastic. And demand is rising fast.

By 2030, the world will need to produce one million tonnes of lithium annually to meet demand — a 36-fold hike on current levels. Tesla boss Elon Musk has said that by 2050, the world will need 300 terawatt hours of battery production capacity — a 200-fold increase on the 1,500 gigawatts of global capacity that currently exists. Battery production, he expects, “will be the limiting factor on progress towards sustainability”.

Electric truck start-up Rivian’s founder RJ Scaringe has called the recent semiconductor shortage that has hit carmakers and other manufacturers a “small appetiser” for what he also expects to be a coming battery shortage.

Benchmark Mineral Intelligence says 299 battery “megafactories” are planned for construction globally between now and 2030. 221 are in China.

That means there will be huge investment over the next two decades in building the factories the West needs to produce the lithium-ion batteries it will need. As well as

How can I invest in lithium and lithium-ion batteries?

What are the options for investors that see lithium and lithium-ion batteries as part of a mega-trend over coming decades they would like exposure to? You can’t, yet, invest directly in lithium as a commodity through ETCs or ETFs tracking the commodity’s spot price or a futures market that offers retail investors access.

But there is one ETF, the Global X Lithium & Battery Tech ETF, that offers direct, diversified exposure to lithium across the full cycle, from mining and refining the metal, through to battery production. It’s listed on the NYSE Arca exchange and tracks the Solactive Global Lithium Index. It currently has 41 holdings and while a majority of assets are Chinese it also counts Albemarle, a U.S. company that is the world’s biggest lithium producer, as one of its top holdings.

NYSE-listed Albemarle Corp. itself is another option and its share price is up 111% over the past 5 years and almost 48% over the past twelve months, though it is down 1.5% in 2022. 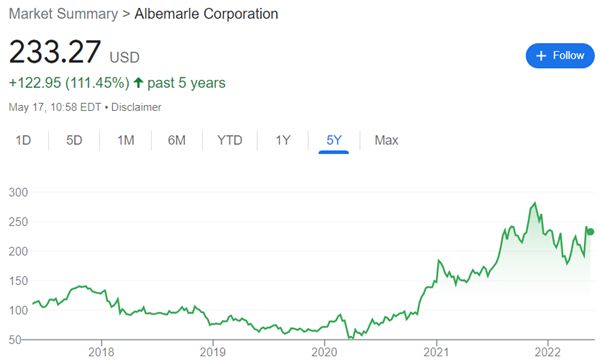 Another established NYSE-listed company focused on lithium is Livent Corp., whose share price is up 57% over the past 12 months and has even gained almost 6% this year. In November it launched a proprietary lithium metal product called LIOVIX that can improve the performance of lithium-ion batteries while reducing manufacturing costs and maintaining environmental sustainability.

The Chilean company Sociedad Química y Minera de Chile (SQM) is also listed on the NYSE and is up 73% this year and 87% over the past twelve months. It has been extracting lithium carbonate in Chile for two decades. 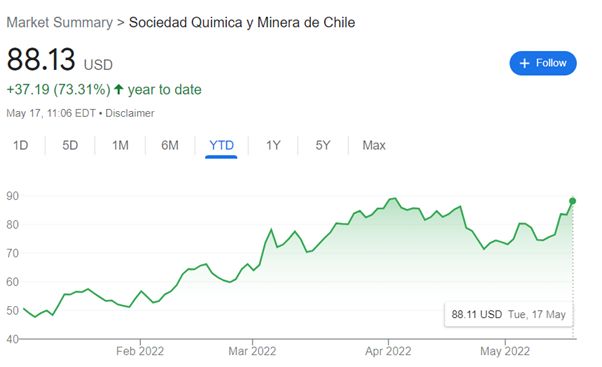 Listed on China’s Shenzhen exchange, Tianqi Lithium Corp owns 25% of SQM and is up 67% over the past twelve months but its share price has declined a little over 15% this year.

For London-listed options, Cadence Minerals has built a portfolio of metals and mining assets with a significant exposure to Lithium. With a market cap of just over £24 million Cadence is a lot smaller than the Wall Street-listed companies mentioned and its share price has also declined 52% this year. However, it has been tipped by some experts and now could be a good moment to get in cheaply for investors with a higher appetite for risk.

Africa-focused Kodal Minerals, which has gold and lithium mining exposure, with a current market cap of a little over £46 million, is another smaller UK company that represents a significant risk but plenty of upside. It has yet to record a profit and has a cash burn rate that could be a concern for some investors but this month secured £3m of additional funding for its flagship lithium project in Mali through an oversubscribed discounted placing.

If it can plough through to take its Bougouni Lithium project to production, investors can expect strong returns.