With the Uber share price in steep decline over the past year, the company has lost over half of its value in just twelve months, the American tech company is focusing on giving investors one thing they love – predictable, recurring income. To achieve that, the ride-hailing and food delivery app company launched the $9.99 Uber One subscription service in the USA in 2021.

The company, worth $46.3 billion despite the hit to its valuation over the past year, has now announced it is to extend the rollout of Uber One to Mexico, Germany and the UK. The package, prices for which have yet to be announced for the new territories, gives subscribers discounts for Uber journeys, free food deliveries from Uber Eats and a number of other perks from priority for highly rated drivers, additional customer service options and compensation for late orders. 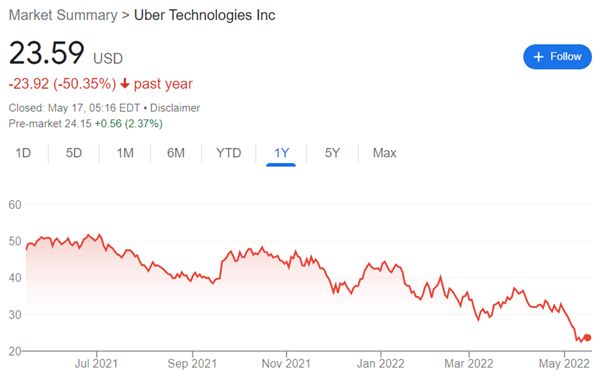 The new model is comparable to Amazon’s highly successful Prime subscription while Deliveroo have also launched a subscription service, Deliveroo Plus, which provides free delivery for £3.49 a month. Deliveroo’s Plus package comes free with Amazon Prime membership in the UK. Subscribers to Deliveroo Plus quadrupled last year after it was rolled into Prime.

There still isn’t a firm launch date for Uber One in the UK but a company spokesperson confirmed it is planned in the near future, commenting:

“We know users across our platform have been asking for a membership programme, and we’re looking forward to launching this for them soon.”

Uber may, however, be launching its subscription model into a tougher climate than would have been the case a year ago with the evidence suggesting British households are trimming monthly subscriptions. Consumer intelligence firm Kantar says as many as 1.5 million UK households cancelled video streaming subscriptions like Netflix, Disney+, Amazon Prime and YouTube Premium in the first quarter of this year.

However, Uber One has proven a success in the tech company’s domestic U.S. market. Uber chief executive Dara Khosrowshahi said earlier this month when the company published its quarter results that subscribers spend 2.7% times as much on Uber’s services than non-subscribers.

Despite issues, especially around its London license, the UK is one of Uber’s key markets outside of the USA. Years of disputes and tensions with the capital’s transport regulator TfL were resolved in March with the granting of a new 30-month operating license for London. However, prices have had to rise recently due to a combination of higher fuel costs and a leap in demand after the end of Covid-19 pandemic restrictions.

Uber’s expenses in the UK have also risen after defeat in court cases have forced the company to pay its drivers at least minimum wage while they are on call as well as granting holiday pay and starting to pay VAT on rides after government pressure. Bolt, Uber’s biggest rival in the UK has not yet made the same moves. However, Mr Khosrowshahi told investors recently that the company’s UK business is profitable. UK users spent £778 million on Uber rides over the first three months of the year compared to £726 million over the same quarter in 2021.

Despite that, the company’s share price has fallen by over 46% this year as it has suffered from the broader market sell-off that has particularly hurt high growth tech companies as investors have shied away from risk. However, Uber still expects to bank an overall profit this year for the first time thanks to its ride-hailing business returning to pre-pandemic levels.

Uber also plans to start offering plane and train tickets as well as car rentals via its app in the UK at some point this year. In the USA a new service will allow larger groups to use the app to charter coaches.

There are also plans for pilot projects for robot food delivery with two set for launch in Los Angeles in partnership with robotics start-ups. The first will involve autonomous cars and the second will see deliveries made by four-wheeled robots that will travel along pavements and, hopefully, be able to avoid pedestrians.