The Hut Group (THG), the British ecommerce operation that went public last year through a September IPO has seen its share price rise again this morning after reporting a 51% rise in sales. Revenues of £558.7 million, 51% up year-on-year, comfortably beat the company’s forward guidance for an improvement of between 40% and 45%. 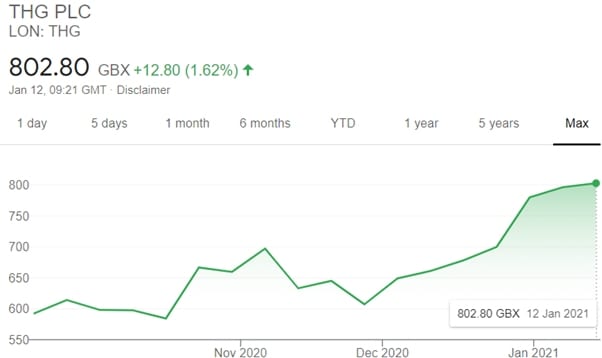 That figure was itself an upward revision on the company’s initial projection of its anticipated performance. When it listed it told investors it expected 2020 sales to be a 25% improvement on the previous year.

THG also now expects 2021 growth to come in at between 30% and 35% up on 2020 figures. The Manchester-based company put the accelerated growth rate down to attracting 3.5 million new customers over the 3 months to the end of December. That took new customer acquisition numbers to 10.7 million for the year.

Two thirds of 2020’s growth was driven by THG’s beauty division, which includes the ecommerce websites Lookfantastic and Glossybox, as well as proprietary brands including Espa and Eyeko.

A push into the U.S. market is also boosting revenues and future growth potential. Last month American online beauty retailer Dermstore was acquired for $350 million. While The Hut Group has forged a reputation for acquisitions, the Dermstore deal was its biggest yet.

THG was founded by CEO Matthew Moulding in 2004, originally starting life as a website selling DVDs online. It now owns around 200 ecommerce websites and an ecommerce tech platform, THC Ingenuity, it licenses to other brands selling online.

As was the case for many other ecommerce businesses, 2020 was a transformative year for The Hut Group. As well as going public, the huge growth in online shopping due to pandemic restrictions has accelerated the general trend towards ecommerce accounting for a greater overall share of retail spend. As Mr Moulding commented:

“Following our successful listing on the London Stock Exchange in September 2020, we have accelerated our sales growth across all areas of the group, underpinned by record new customer numbers.”

Mr Moulding has retained almost complete control of The Hut Group, despite now owning just 25% of the group’s equity, through a ‘golden share’ vote that allows him to veto any potential takeover bids or other major structural changes to the company. He also holds the roles of both chief executive and executive chairman and is the company’s landlord, with a contract securing him at least £19 million in annual rent payments.

Despite the unorthodox approach to corporate governance concerning some in the City, and meaning The Hut Group has only a standard rather than premium listing which prevents it being included in indices like the FTSE 100 its valuation would qualify it for, investors haven’t been put off. Having been valued at £4.5 billion during its IPO, THG is now worth £7.82 billion – a gain of almost 75%.

Mr Moulding’s 25% stake in the company he founded is currently worth £1.9 billion and a £250 million incentive scheme, split between the founder and employees, has already been triggered by the company’s share price rise since listing. Mr Moulding, is now in line for a £830 million payment that could reach £1 billion, based on the incentive scheme that is tied to the group’s valuation.

A sub-committee of special advisers has also been set up in an effort to address governance concerns. Katie Vicker, an international regulatory and compliance partner at law firm Osborne Clark, and Andrew Dyson, a partner and global co-chair of data protection, privacy group DLA Piper were added to the sub-committee earlier this week.