Just how exposed to Russia is the average UK investor and pension fund?

This week at least 24 funds with exposure to Russia suspended withdrawals, locking in £2.64 billion of investor cash. Most were funds either specifically focused on Russia, like the Liontrust Russia fund and Pictet Russian Equities but other funds, mainly “emerging Europe” funds, have also seen withdrawals suspended. For example, the BlackRock Emerging Europe Fund, which has 66.64% of its capital in Russian assets.

There are another eight Emerging Europe funds that have not been suspended and have at least a 50% of capital directly exposed to Russia. The most exposed is the Invesco Emerging European fund, which has 78% exposure to Russian equities. It is to be liquidated on March 11 and investors will get back whatever is raised after assets have been sold.

However, it’s fair to say it’s currently a buyer’s market for Russian assets and investors in the Invesco fund will inevitably suffer heavy losses. If you are in the unfortunate position of being locked into one of the suspended funds and wonder at just how heavy a loss holdings are likely to be sold at, investment trusts with high exposure to Russia offer a clue.

Unlike standard funds, investors in which have to apply to withdraw their cash from and whose valuation is adjusted monthly, investment trust units are traded on a stock exchange. That means managers cannot suspend withdrawals and investors can simply sell their stakes as they would stocks.

There are currently 28 investment trusts listed on the London Stock Exchange that have at least some exposure to Russia. The most exposed investment trust is the JP Morgan Russian Securities fund with 88% of its capital invested in Russian assets. It’s down over 86% since the start of the year and 78.5% over the past week. 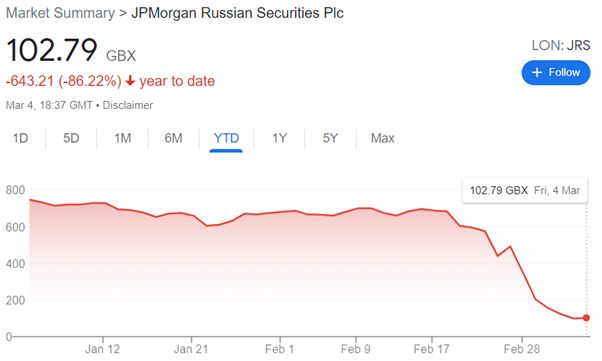 Investors in the Invesco Emerging Europe fund, 78% exposed to Russia, can therefore probably expect to see similar losses when the fund’s assets are sold off. The extent of the plunge of fund valuations is directly correlated to the extent of exposure to Russia. The Barings Emerging EMEA Opportunities fund, for example, has 26.8% exposure to Russia and dropped by a comparatively modest 12% last week.

Other investment classes with exposure to Russian assets include commodity funds. A recent analysis by the online investment platform AJ Bell highlights the WS Charteris Gold & Precious metals fund has the highest exposure in this category at 4.56%. While that is far less than Russia and Emerging Europe-focused funds, it’s still significant enough that it will almost certainly noticeably hurt investment returns.

How exposed to Russia are standard investment and pension funds?

Almost anyone in the UK with a broad-based investment portfolio, not just those with investments more exposed to Russia, will have suffered significant losses last week. Most of those losses are not the result of exposure to Russian assets but rather broader concerns about how the war in Ukraine will hit global economic growth over the coming months and potentially years.

But some of your mainstream, general investments such as pension funds are almost certainly directly exposed to Russian assets to some extent. And it can be difficult to tell how much, especially in the case of funds.

The Times columnist James Coney illustrates this through the example of the parliamentary pension fund. When trustees of the fund were last week asked by journalists if it was invested in Russian assets the opaque reply was “as far as we are aware” the fund has no “direct” holdings in Russia.

However, further digging into the holdings listed on the fund’s fact sheet, something it is pointed out is far too often very difficult for investors to get a hold of, revealed an investment in the Pimco GIS Global Libor Plus Bond fund which has a small investment in Russian debt.

In the end, the analysis concluded the parliamentary pension fund only has a measly £50,000 exposed to that particular holding of that particular fund. Not exposure of any real significance financially, nor enough to rouse any real public indignation.

But the winding research needed to uncover the tiny amount of exposure to, and investment in, Russian assets is telling. Most investors will have some level of exposure to Russia.

Until the last couple of weeks, British investors had around £550 billion invested in Russia and much of it via investment vehicles that wouldn’t be suspected. If your pension is invested in tracker funds that follow major London indices like the FTSE 100 and FTSE 250, you have some exposure to Russian stocks.

How exposed  to Russia are the major FTSE indices?

There are quite a number of Russian firms listed in London and several that are constituents of the FTSE 100 and FTSE 250. The mining and steel making company Evraz, partly owned by Roman Abramovich, for example, is a constituent of the FTSE 100. Its valuation dropped 62% last week, weighing on the index.

Evraz’s drop in value means it will be demoted to the FTSE 250 on March 21 but then, unless it is hit by sanctions, every UK fund invested in a FTSE 250 index tracker will hold shares in it.

However, unless you own share directly in these companies, you won’t be badly exposed. Evraz’s FTSE 100 weighting is just 0.02% and it will still account for around just 0.09% of the FTSE 250. Polymetal’s FTSE 100 weighting was 0.06% and will be 0.29% in the midcap index. Petropavlovsk’s smallcap index weighting is less than 0.01%. These estimates were calculated by the asset manager Numis.

You are probably more exposed to non-Russian stocks that earn significant revenue in Russia. For example, the FTSE 100 bottling company Coca-Cola HBC earns about 12% of its revenues in Russia says the investment platform company Hargreaves Lansdowne, as does the paper and packaging company Mondi.

Markets data company Morningstar lists Exillon Energy, Amur Minerals, Zaim Credit Systems, Petroneft Resources and Zoltav Resources as other London-listed stocks with operations in Russia that are not part of the FTSE indices because they don’t hold the required premium listings.

While you may be surprised to learn your pension or general investment fund almost certainly has some direct exposure to Russian assets via index trackers, there is no need to panic. In the large majority of cases the level of exposure will be minimal.

The pension consultancy Barnett Waddingham estimates the average defined contribution pension, the standard workplace pension scheme, has just 0.2% direct exposure to Russia. That figure is even lower for defined benefit pension schemes that pay a guaranteed retirement income, at between just 0.1% and 0.2%.

Non-European emerging market funds, which you may well be invested in, also generally have low direct exposure to Russia at under 1%.

Selling now would almost certainly be a bad decision and lock in steep losses taken over the past couple of weeks by most general investment classes. If you have significant direct investments in Russia via an Emerging Europe fund or individual stocks, you will take a heavier hit. Otherwise, you should be fine.