Sony is hoping to maintain the recent upward trajectory of share price after agreeing the latest acquisition of a spate of M&A activity across the video games sector by buying Bungie for $3.6 billion. Bungie, a leading American video games developer and behind the popular Halo and Destiny franchises, becomes the third multibillion acquisition deal in the sector this month after Take-Two Interactive agreed to buy mobile games specialist Zynga for $12.7 billion and Microsoft swooped for Activision Blizzard at a price tag of $68.7 billion.

Sony’s deal for Bungie is relatively small-fry by comparison but is another sign of the frenzied activity in an industry tipped to continue its recent rapid growth over the next several year. The company’s share price, which took a hit when rival Microsoft, announced its deal for Activision Blizzard, which develops franchises including World of Warcraft, Crash Bandicoot, Call of Duty and Candy Crush Saga, bounced back 4.5% yesterday. 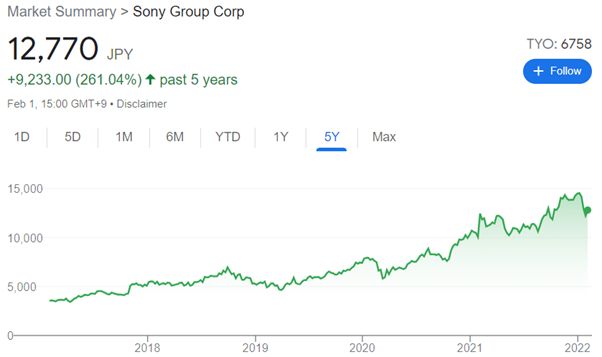 Like Microsoft’s deal for Activision Blizzard, which still has to gain regulatory and shareholder approval, Sony’s move for Bungie represents vertical integration by bolstering its stable of games publishers. Microsoft sells the Xbox console which is the Sony PlayStation’s main rival.

Like the original content-based battle between the major video streaming platforms like Netflix, Disney+ and Apple TV+, video gaming platform players have started to invest heavily in proprietary gaming content. Halo, which Bungie created and developed until 2010, was one of the gaming franchises that put Microsoft’s Xbox on the map 20 years ago.

“Bungie has created and continues to evolve some of the world’s most beloved video game franchises and, by aligning its values with people’s desire to share gameplay experiences, they bring together millions of people around the world.”

Bungie chairman and chief executive Pete Parsons was also enthusiastic about the deal, while making it clear the games developer will continue to work as an independent business within Sony Group. He commented through a blog post:

The Sony share price has gained over 22% in the past 12 months, despite a challenging start to 2022 which has seen its valuation take a 14% hit.